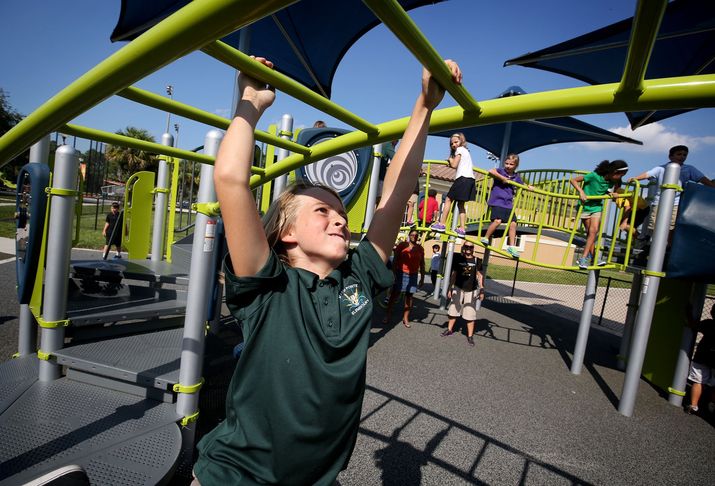 Dozens of children, many from Marsh Pointe Elementary School, were excited to get their hands on the monkey bars, slide and other apparatus added to Mirasol Park in the far corner from the school near the softball fields. They ran for it as soon as officials cut the ribbon Wednesday, quickly making themselves at home on the sprawling playground.

Lillyanne Gross, 10, said she’s seen a lot of parks, but she’ll be a regular at this one. She liked a spinning vertical spiral and the monkey bars, she said.

“I’ve never been anywhere like this. It’s like the best playground in the world so far,” Gross said, while enjoying a cotton candy-flavored ice cone.

Students from the city’s Riverside Youth Enrichment Center’s after-school program tested the new playground. The park off Jog Road has some new contraptions for moms, dads, grandparents and babysitters, too. About a half dozen pieces of exercise equipment overlook the playground so they can get a workout while watching their kids at play.

Recreation Director Laura Schuppert said it’s a prototype for what she’d like to see at other parks.

“It’s kind of like bringing the gym outside,” Schuppert said. “It’s amazing the number of people out there using it.”

Eva John of West Palm Beach, said her 9-year-old daughter, Natalia, loves the playground. She comes there often, and John appreciates that it’s so close to the school, she said. She said she’ll use the fitness equipment, especially when she arrives early to pick up Natalia at the end of the school day.