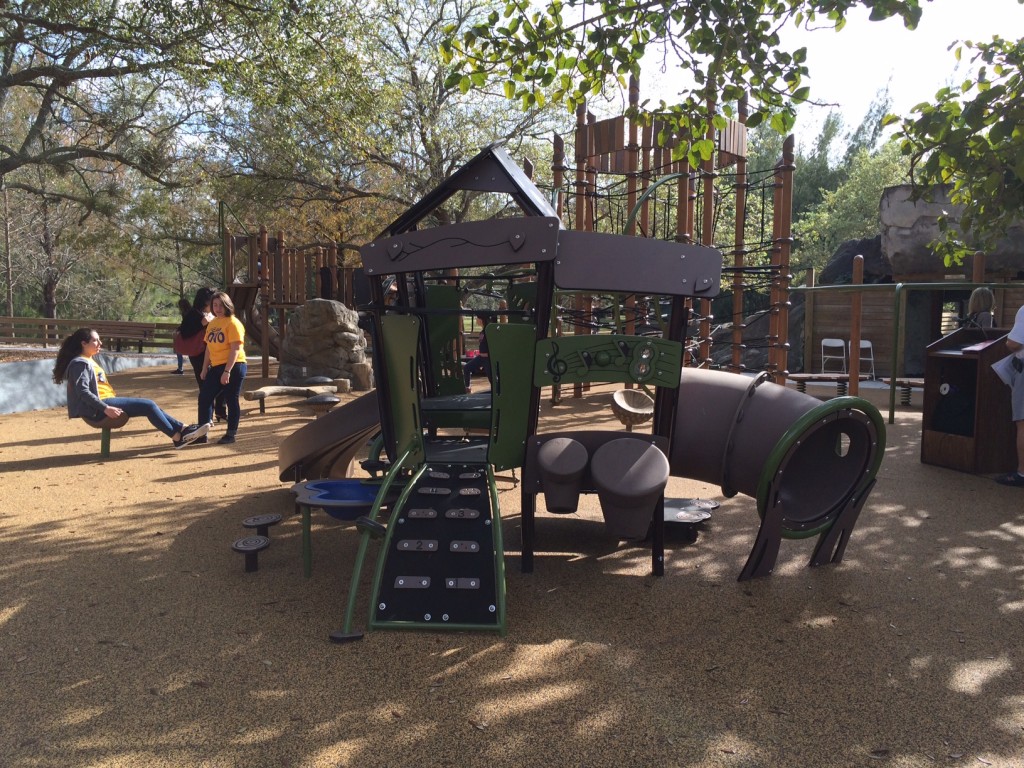 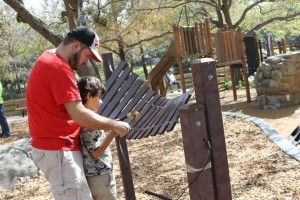 Yovany Castaneda plays a giant xylophone with his son Sean at Amelia Earhart Park on Saturday, Feb. 7. “He plays the piano,” says Castaneda of his son, “so I’m just trying to transfer what he’s learning on to this.”

Named after the first female aviator to fly alone across the Atlantic Ocean, Amelia Earhart Park in Hialeah now boasts a half-million-dollar new playground area for kids to experience their own adventures, both in the air — on monkey-bars and swings — and on land.

Nestled between strands of oak trees and pristine lakes, “Tom Sawyer’s Play Island” is the largest playground within Miami-Dade County’s parks. At 7,500 square feet, it is designed to promote adventure so that kids will be inspired to play outside and be more active. Swings, slides, and a multilevel fort are some of the new amenities paid for with bonds from the countywide “Building Better Communities” General Obligation Bond Program, which helps finance neighborhood and regional government capital improvement projects.

The Building Better Communities” General Obligation Bond Program is overseen by the county’s citizens’ advisory committee, which advises county officials on the implementation of the $2.9 billion bond program.

The yearlong renovation was undertaken because the playground, which was built in 1998 and was made primarily of wood, was deteriorating. The cost of the playground and landscaping to that area amounted to $500,000.

District 13 commissioner Esteban Bovo Jr., the county parks department’s staff, and the designers and developers of the playground cut a purple ribbon to commemorate the debut of “Play Island” on Saturday. Meanwhile, kids from 2 to 12 years old wasted no time trying out the new equipment. Some of the biggest hits were the jumbo music makers, like an xylophone and chimes — which parents as well as children enjoyed playing.

Yovany Castaneda of Allapattah, for example, was teaching his son Sean how to play certain notes on the xylophone with the percussion sticks that were attached by silicone-coated wires. “He plays piano,” said Castaneda, “so I’m just trying to have him transfer what he’s learning onto that.”

Ana Cruz of Hialeah has been taking her children to the playground even before its massive makeover. “It was in bad shape,” she said, “so I’m glad they fixed it up.”

As she spoke, her son, 9-year-old Samuel Morales, explored the playground — swinging on monkey bars, climbing a huge concrete boulder with other kids, playing the musical instruments and swinging high in the air on a swing that can accommodate disabled children, after getting a big push from his mom. “He’s a monkey bar expert,” she says. “He’s also very musical so he loves all the instruments here.”

The county’s landscape architect of 21 years, Karen Cheney, says she worked closely with Rep Services, Inc., a Lake Mary-based organization that represents playground manufacturers, to make sure that the playground equipment is “inclusive so that all kids can play together.” The playground’s floor area, made of a soft yet durable rubber composite, is wide enough so that kids in wheelchairs can access the play areas. The oversized swing with a built-in harness is designed for kids with physical and cognitive conditions.

“The intent is to build something that will serve several generations of all abilities,” said Rep Services, Inc.’s president, JT Almon II, of the materials used to create “Play Island.” They range from steel that has been “digitally enhanced” to resemble tree trunks (to give the kids a feel that they’re playing in a forest) to repurposed and recycled materials that have a minimum lifespan expectancy of 18-20 years.

In addition to “Play Island,”Amelia Earhart Park’s 515-acres features five lakes, picnic facilities, an 18-hole disc golf course (a sport where people throw Frisbees into suspended catching devices; the objective is to make it into the target in the fewest number of throws), a five-acre fenced dog park, mountain-bike trail, a “farm village,” wakeboarding and soccer complexes, and a farmer’s market, which is held every Sunday.

The park was named after the pilot, who aimed to be the first woman to fly around the world, since it’s near the site from which she took her last journey from the continental U.S. in 1937: here, in Hialeah.