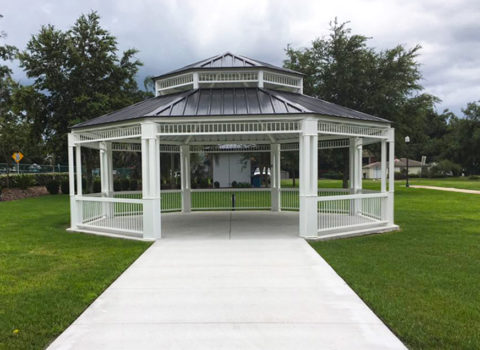 Courier Field’s new gazebo by Poligon is up and ready for weddings, parties, even relaxing!

History of the Park
Courier Field was originally owned by the W.B. Herring family and used for civic activities and educational programs.

Once the 1914 Plant City High School was constructed, the area was used for physical education classes. The A.P. Cooke family purchased The Courier newspaper in 1944 and Mr. Cooke used his column in the paper to spearhead a one-man drive to raise money to purchase the land. $3,000 was raised and the land was purchased and then donated to the Hillsborough County School system. The land was named Courier Field in recognition of Mr. Cooke’s efforts.

In 2003, the School District of Hillsborough County deeded the property to the City for park use. The City made various improvements to the property, including a shelter (replaced in 2018) and restrooms.

In 2008, the Plant City Armed Forces Memorials Foundation, Inc. was formed following a discussion concerning the lack of a monument as a tribute to the men and women of our area that served, fought and died for our country. Plans were soon developed to add a Veterans Monument and gathering area to the northern portion of the park. Through the support of the community, funds were raised and the monument area was dedicated on July 1, 2010.

Products Included in this Project